We reach the end of week 9, and so too the end of an episode in the Silver Jill production.

In order to better control my time and keep track of my progress, I decided in January to work only on the larger spreads and full pages for Silver Jill, getting the bulk of then work done. Once complete, I would be able to fill in the rest of the book with all the spot and quarter illustrations.

January saw the pages mocked up on cheaper paper, using grids to align where text will go. Since this is the layout of the page, it is surprisingly time consuming for such a rough result. Even though I only started this plan in the middle of the month, I still hit my deadline and was able to proceed to step 2 – inking.

February saw a lot of inking done, a lot of pens dried out, and a lot of backache acquired. But another deadline was met, as about 40 A3 pages were inked on time. 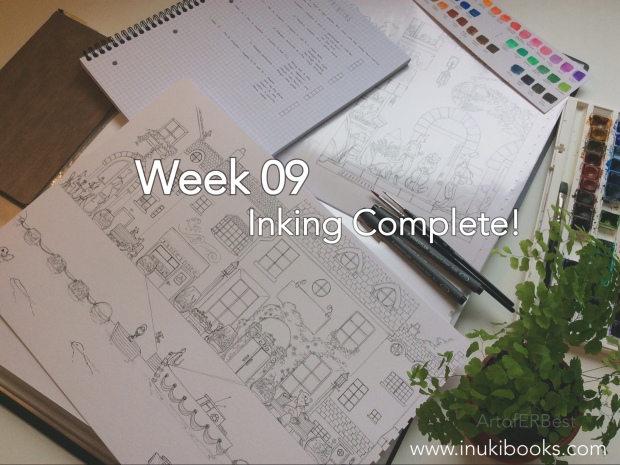 2 were missed, but as they need a lot of design work too, I’m… discounting them, for now.

I’m hoping to paint a good bundle of them before going away at the end of April. I was hoping to paint them all by that point, and maybe that’s a possibility if I keep up with Habitica and Forest; at least one A3 spread a day over the two months would still leave me with weekends free, something I’ve been trying to allow myself for years now and only recently succeeded in.

But I’m remaining realistic, as some of these spreads will easily take several days, while others only a few hours. I’m not sure how it’ll pan out, but that’s why I keep a time journal, so I can learn about my own pace.

In other news: although I dedicated an entire evening to progressing with The Naiad Chronicles – Guardian, it resulted in only a few extra lines and a lot of reading-over-past-bits to try and make sure it was all going logically. Thankfully it is, but I’d love to see this first draft finished by the end of April too.

Caimwind development is going well. I’ve had a few ideas come to me and I’m resisting the urge to start writing proper; if I can at least get some maps, some key places and a few established things anchored, then I might try to write a few introductory chapters while I’m on holiday in April. So with this rare, spare Sunday, I might get a basic map down.